This case happened in Austin. Foreclosure and eviction is what follows.

We were originally hired to foreclose on a condominium situated on the outskirts of the University of Texas campus. We followed our usual foreclosure procedures and obtained title to the property.

The client then entered into prolonged negotiations with the debtor to resolve the debt. The negotiations continued for over six months. At that point in time the debtor had not made payment on the debt for more than a year. Eventually, no resolution was found and we were instructed to evict the debtor from the property. 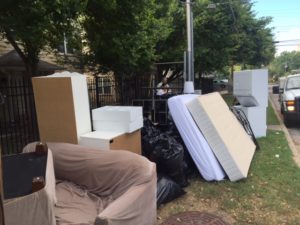 When the Sheriff puts your stuff on the street.[/caption]

We had an agent of ours  stop by the condominium a few days later to see what the debtor's plans were for moving out. But the debtor said, "there was no foreclosure." One of the worst cases of denial we have ever seen.

When the Sheriff puts your stuff on the street.[/caption]

The client then sold the condo at a profit and all's well that ends well.